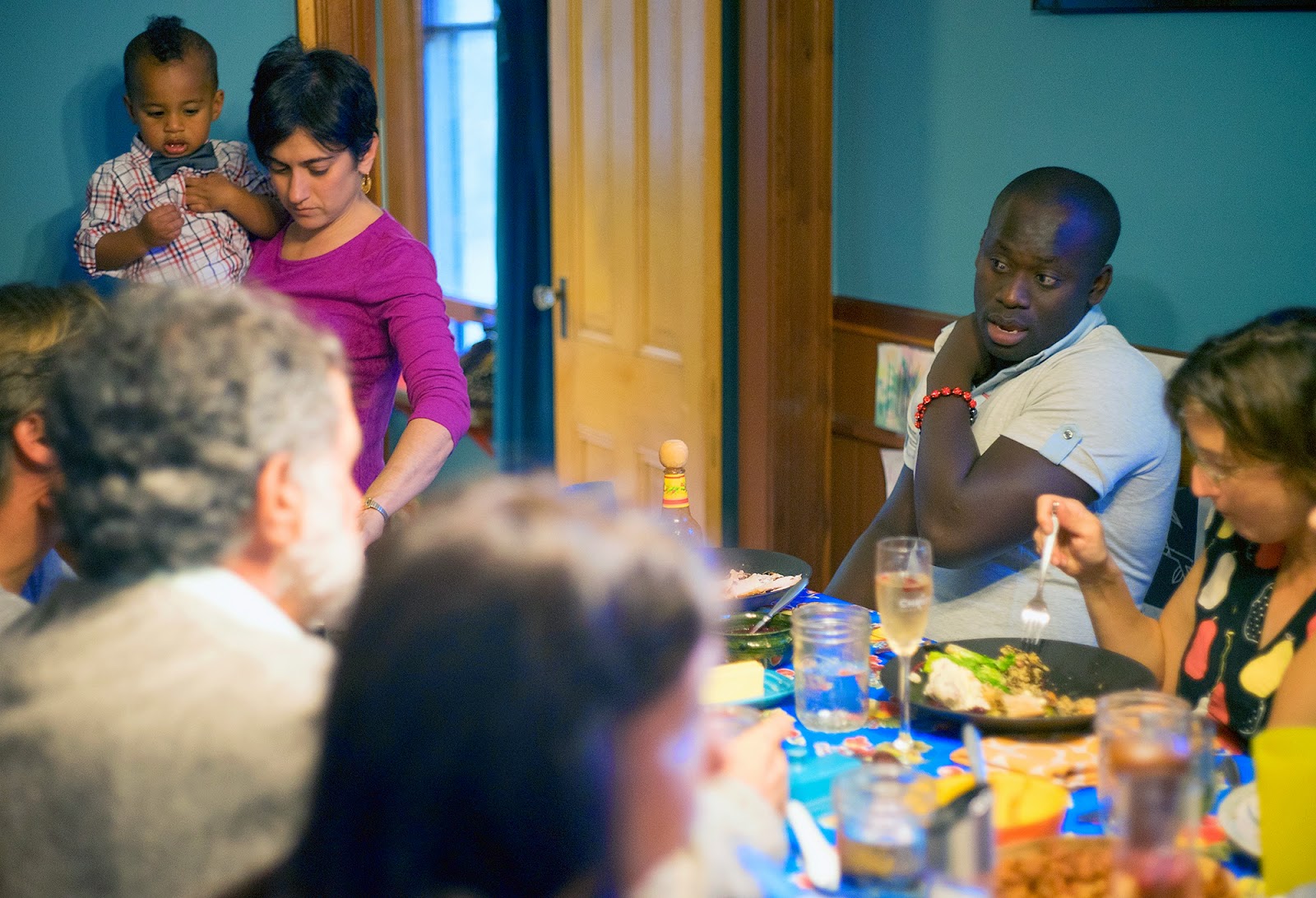 Here's hoping your holiday was everything you wanted it to be.  Mine was, and more.

My first Thanksgiving with my husband's extended family.  Many from New York City, which is always fabulous because I love New Yorkers.

This smart and lively group was full of oldsters and children, all moving  harmoniously in the same direction of enjoyment of good food and each others' company.  A stark contrast from my family of origin, where gatherings are rather subdued and fastidious.  I shared my chocolate cake with my husband, and then the hosts' mother/mother in-law, and then father/father-in law, all from the same plate and the same fork.  Not a care in the world!  Not a single sniffle or grabbing of a "clean" fork.  This moment, for me, was symbolic of the vast difference in my two families.

Grandpa hoisted 2 year old grandson onto his shoulders, at the dinner table.  Fantastic.  The grown ups sat at the kid's table, declaring, "Why should the children always get the small table?!"  Soccer was played in the empty lot between dinner and dessert.  Wild stories were exchanged.  Kids ran in and out of the house.  Mid-town Sacramento looked like a ghost town, it was so quiet.  There we were, right on the corner of a usually busy street, and I don't recall a single car passing that afternoon.  We had the joint to ourselves.

And today...well, today my daughter and her family arrive.  We have much to do, as we are having many of last night's revelers to lunch today to meet my family.  Better get on with it -- fun awaits!

Here's to you and yours, and thank you for stopping by and sharing yourselves with me.  Have a fantastic weekend! 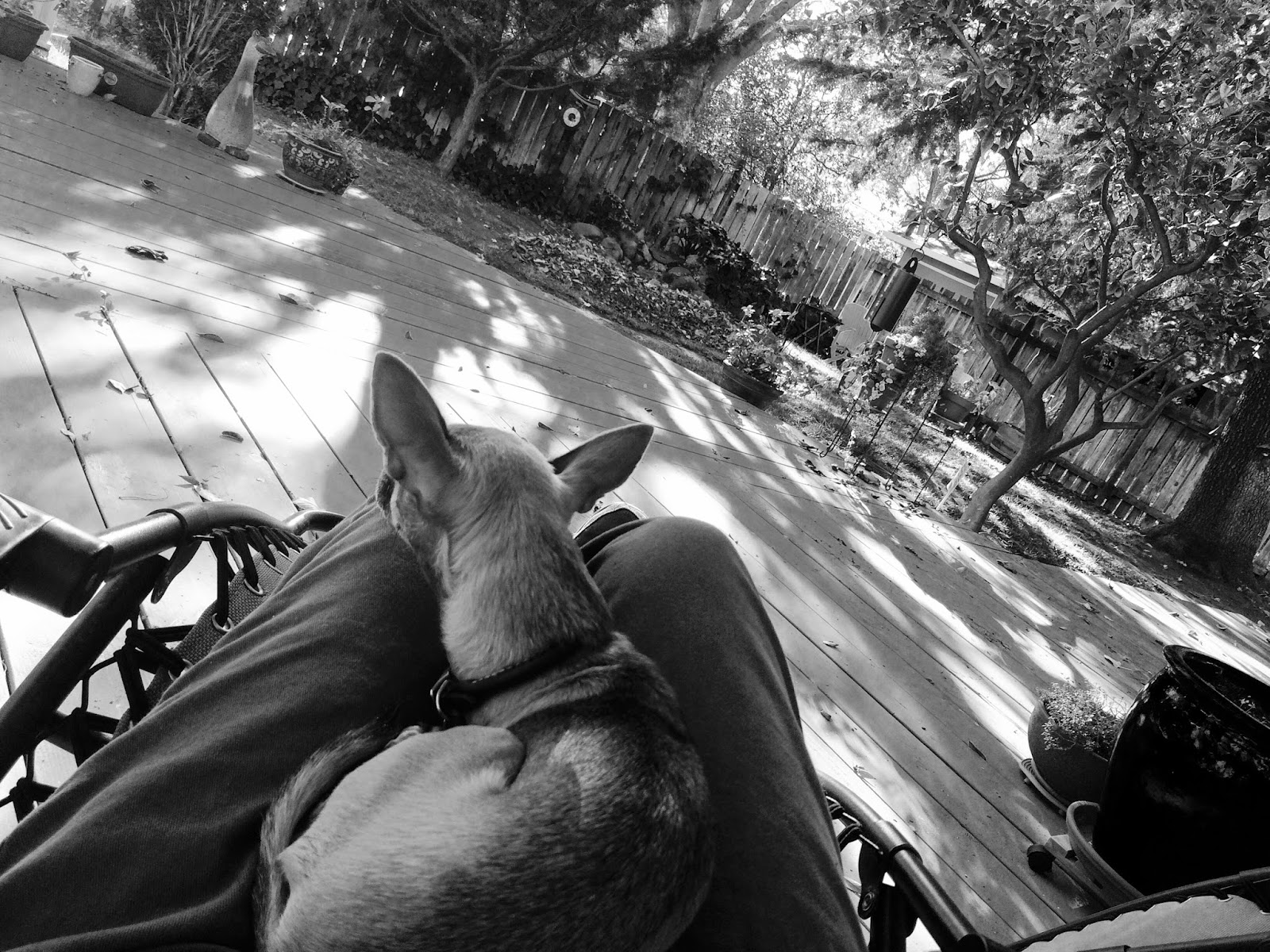 Good news to report: today mom gets her back surgery, a procedure called Kyphoplasty.  Minimally invasive, it should immediately alleviate her pain from the fracture she sustained in a fall a couple of weeks ago.

What ticks me no end is, why didn't they do the procedure 2 weeks ago?  Our family had to kick and scream and call, and call again, before doctors relented and agreed to go ahead.  In the meantime, my mother has been in extreme pain, they have been paying for 24/7 in-home caregiving and their lives have been turned upside down.  Dad has lost appreciable weight and is weary beyond belief.

Meanwhile, my ribs are still sore from the fall I took in our yard a week ago.  They are likely to be sore for awhile, but as far as I know there are no broken or cracked ribs.  I had an xray two days ago but no word from doc.  I assume this means there wasn't anything extraordinary on the images, but really, am I safe assuming this? 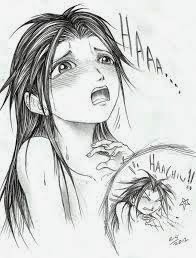 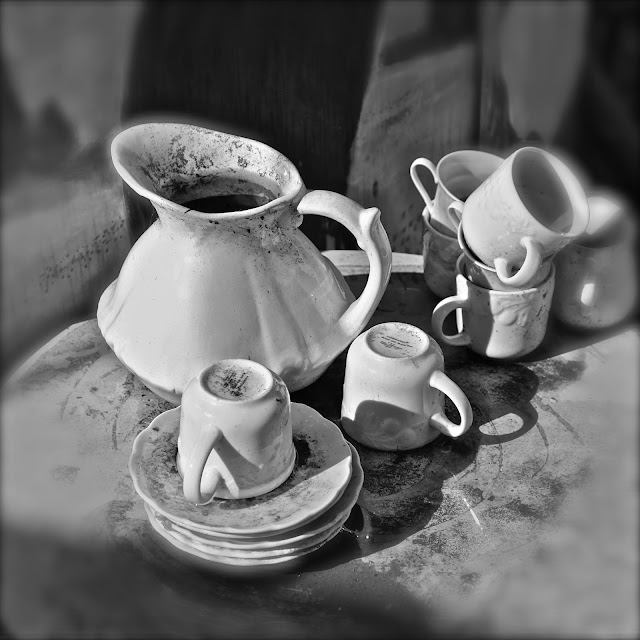 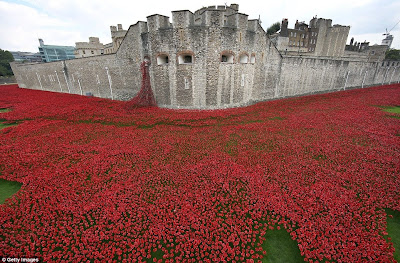 If cotton is the fabric of my life, then this is the play list of my life:


This is a very partial list.  But after this week, I've been listening to my old music a lot.  First, my mom fell and broke a vertebrae in her back.  I spent the entire night with her in the ER, sleeping when I could, lying across three plastic chair with a pillow and my lovely electric throw blanket (I know the ER is always cold, so....).  Then having to intervene when my dad, who is a control freak, fired the first care giver we hired to take care of mom at home.  I had to work some magic there, since he felt extremely upset, defensive and confused.  My experience with professional care given helped immensely.  Dad and I came to certain agreements and wrote them down for future reference.  He said I was a "Godsend."  That felt good.  All subsequent care givers have worked out well. 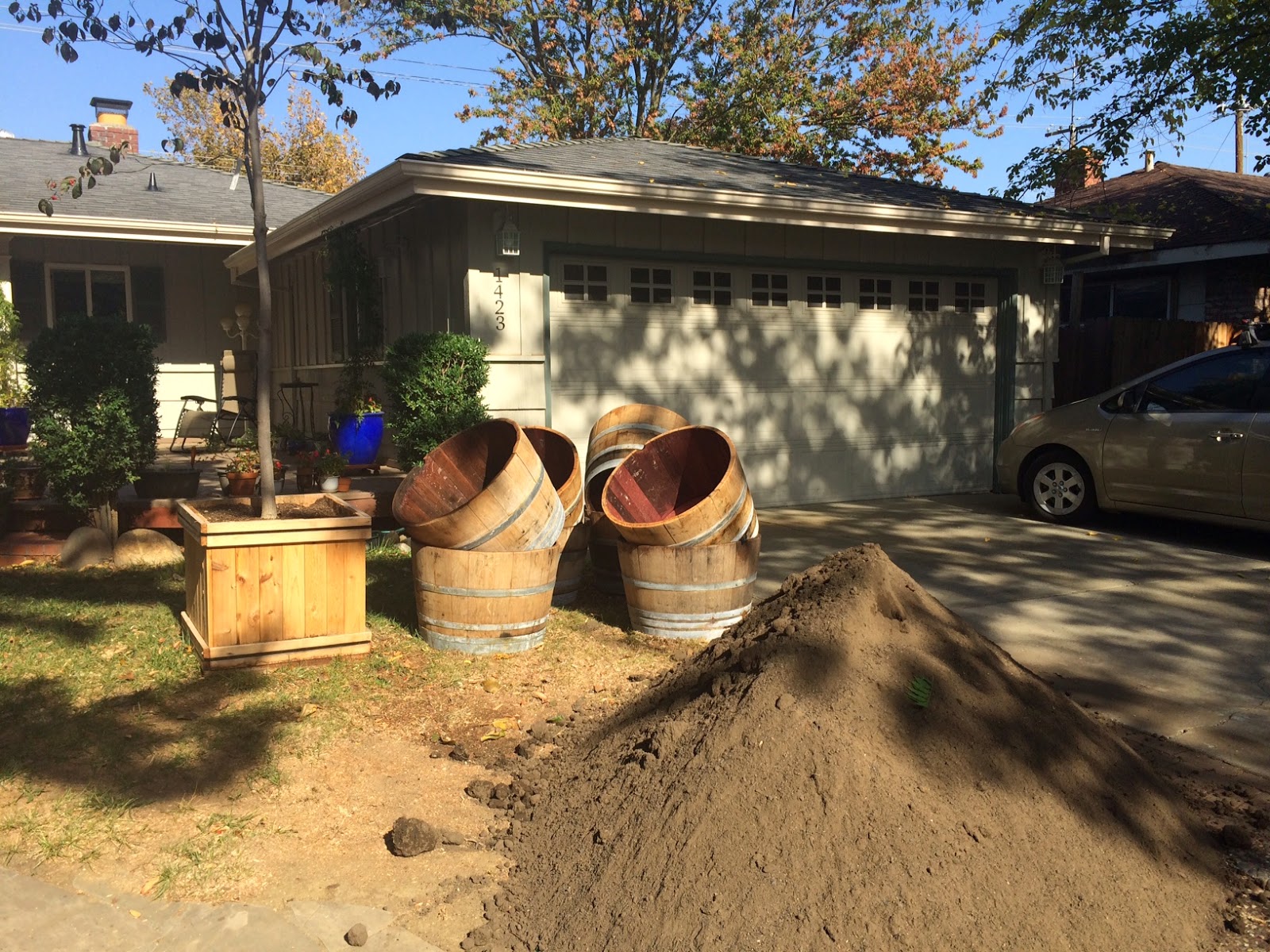 Of course I'm blown away by the number of states who elected republicans to Washington DC.  I must really be out of sync with the United States.  I didn't believe all the pundits prior to the election when they predicted a huge GOP win.  Oy.  I needed a couple gin and tonics on election night.  I just may stay high for the next couple of years.

After my night at the hospital, and then a night at my folks' home, it's fantastic to be back home with my darling husband.  Today we continue our quest to improve our garden: we've had soil delivered and half wine barrels and will begin to transplant trees and flowers.  Few things bring me as much pleasure as gardening.  And my husband, of course, but he is not a 'thing.'

Hope you find your pleasure this weekend. 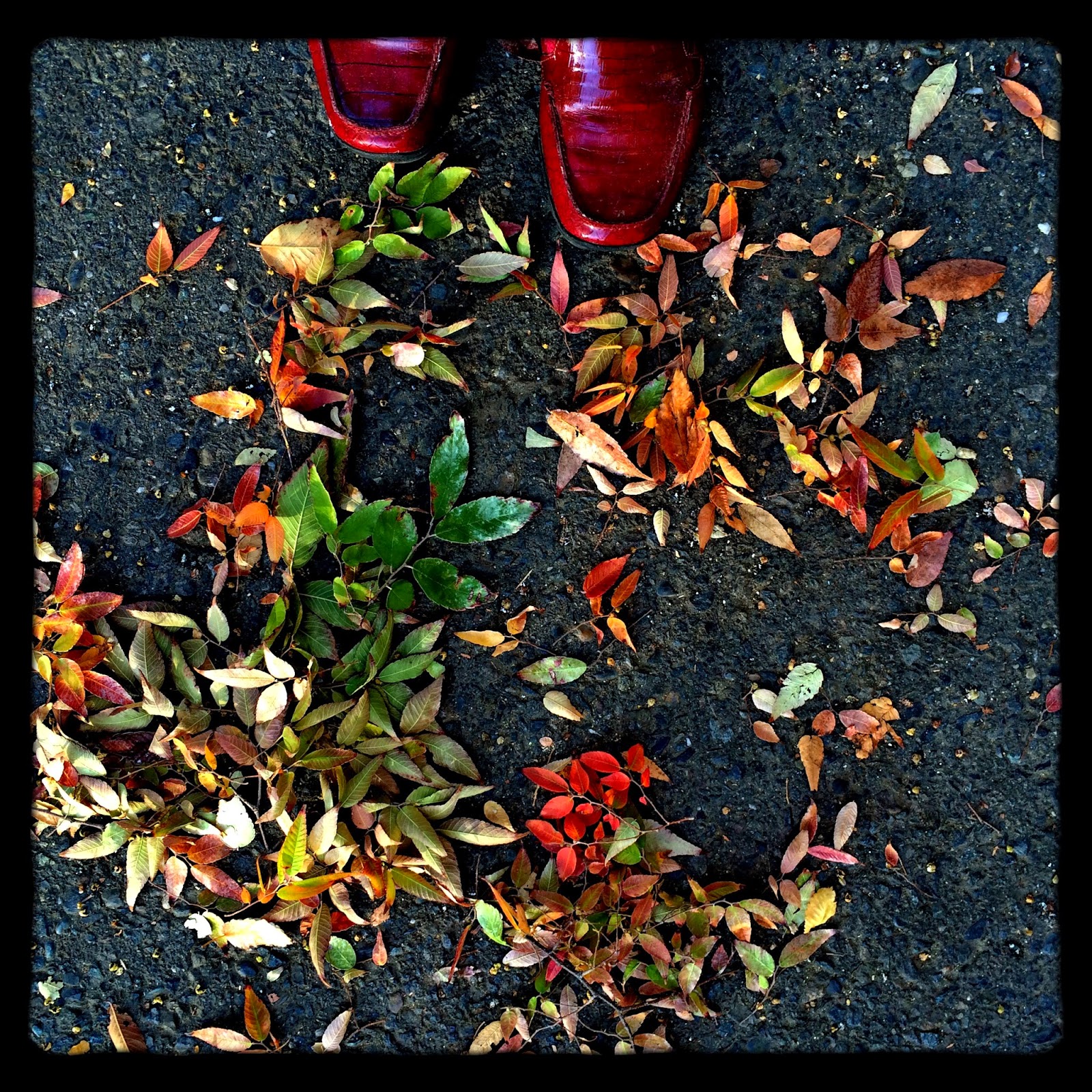 I spent last night in an ER with my mom who had fallen a couple of days before.  She had seen her doc, had x-rays taken, was sent home with pain meds and instructions to rest and see if she felt better in a week.  No such luck.  As it turns out, she broke a vertebrae in her back and the pain became unbearable. 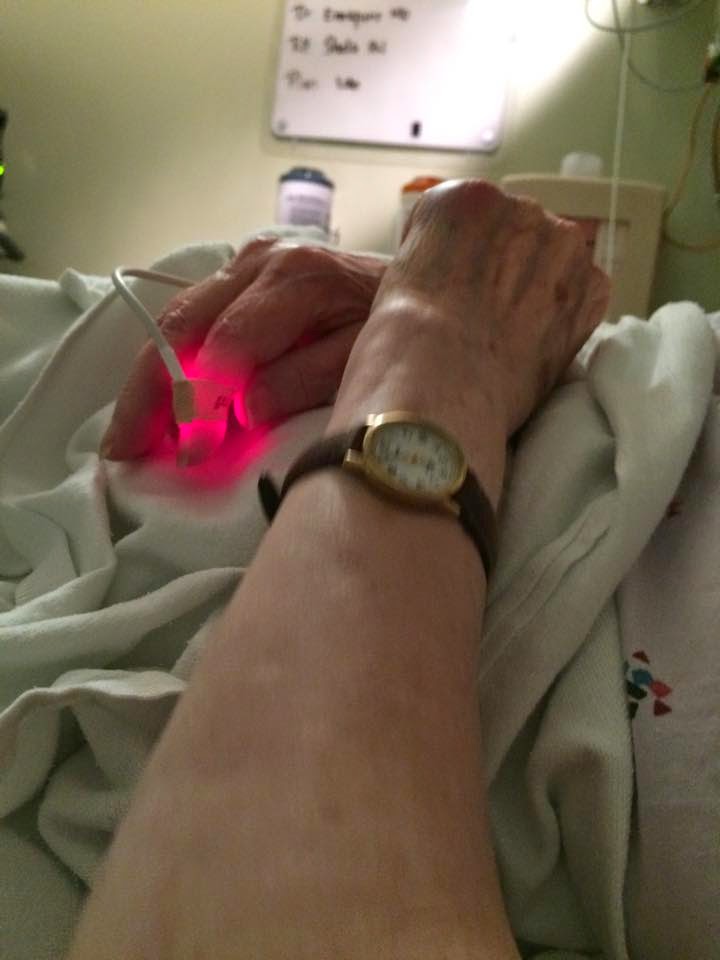 This was mom's 3rd fall in recent weeks.  A consequence of Parkinson's Disease.

My sis took her in and Dad was instructed to stay home and get some rest.  He had been having to lift her repeatedly at home, as she could no longer move her legs.  I took over in the evening and stayed all night.  Luckily, she slept well.  I, on the other hand, was straddling 3 plastic chairs with a pillow that the nurse gave me.  No stranger to ERs, I also brought my throw blanket with electric heat and I'm so glad I did.

Now I think I'll call my massage therapist and arrange for some work to be done.  Ouch.

Mom was released this morning and is home now with a hospital bed and 24/7 caregiver.  The family have been through this before: mom has broken both hips in the last several years.  We've learned a lot about how she handles pain and recovery, and we know enough now to have a family member present at the hospital at all times.  Mistakes get made, and in the past they have had dire consequences for mom.  Never again.  The hospital staff was trying to get us to transfer to a care facility, but we discovered than none of them would allow a family member to sit by her bed.  They said it interfered with patient care, and compromised patient confidentiality for the other patients near her.  So we said, "No, thanks."  Been down that road before.  A disaster.

As the night plodded slowly along, I was up and down to turn off alarms, close the door against a screaming patient that was making mom twitch in her sleep, drink water, go to the bathroom, read a book for awhile, give up reading a book, try sleeping on my back, my side, my other side.  And, thankfully, she dosed away, puffing out her soft little snore like she always does.

Long time readers know I have had my own hospital episodes, and as I spent the night in yet another ER, I was at least thankful that she was getting care, that I was not the one lying in that bed, and that she would be going home in the morning.  It also occurred to me that I haven't been sick in over a year.  I think that's a record.  Maybe it's the husband.  You think?  Does being happy prevent illness? 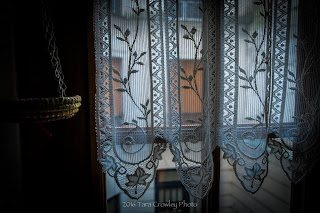