File this under "Mind Blow."  My mother gave me a packet today that contains her newborn baby clothes, delicately embroidered dresses and bonnets, and the hospital packet from Berkeley general in 1935.  Also included were pamphlets on breast feeding and baby care. 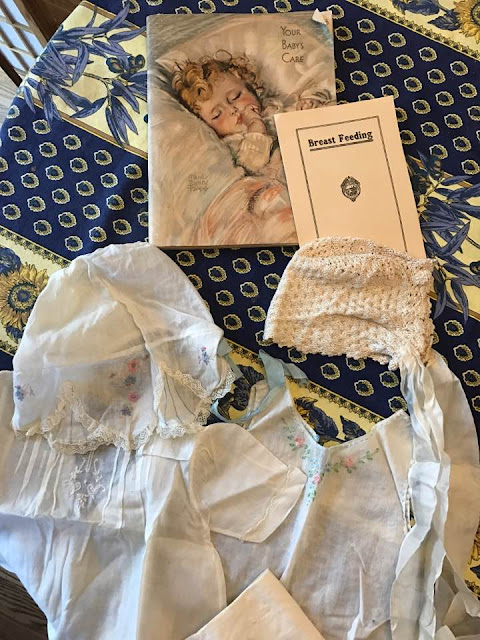 I know I bitch and moan about how much STUFF mom and dad have saved over the years, but this, oh this is a treasure!

I've never seen these before.  I'm not sure she remembered having them.  But wow.  These things are 81 years old.

The clothes are in extraordinarily good shape.  The embroidery on the clothes is beautiful.  The extensive book from the hospital entitled "Your Baby's Care" is quite comprehensive, as is the pamphlet on breast feeding.

That my grandmother, and then my mother, was able to keep them in such good condition is a marvel to me.

I want to put the bonnets on my grand daughter and photograph her in them!

I am touched and honored that my mother gave these to me for safe keeping.

Talk about the passage of time, the arc of a life, and all that stuff I mentioned in my previous post.  These things have really blown my mind. 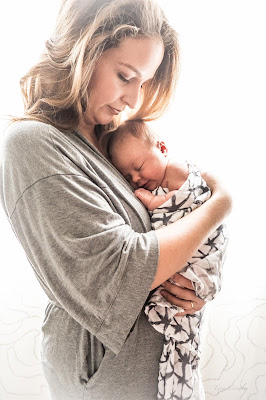 My health was good enough early in the week for a quick trip to visit my daughter's family for a couple of nights.  What bliss holding that baby girl!  I held her when her mom needed a shower.  Or when she needed to make a cup of coffee.  Or wanted a much needed nap.  I watched that baby's ever changing facial expressions and wondered what physic or physical storm was passing through her as she grimaced and turned beet red.  I watched her face in the most peaceful repose when a deep sleep took hold.  What is it about a new born baby?  So fragile and yet so tough (yeah, getting born is tough!).  Completely ageless and timeless.  I look down at her and see the images of my grandmother as a baby, 105 years ago, being cradled by her own loving mother.  I see my mother. I see my daughter. I see the entire arc of a life spinning in front of my eyes.  Sadly, I see all the unlucky babes throughout the world who, innocents though they are, have had the most horrific acts done to them in war, and famine, and just plain mundane everyday cruelty.  Why do they suffer while my grand daughter is allowed to flourish?

Holding this baby is an emotional roller coaster of love, faith, and trust juxtaposed with terror, fear and dark apocalyptic scenarios.  I breathe out the fear and hope for the best.  It's all any of us can do.  I wish that, when dealing with other humans, we could all remember that once we were some parent's most beloved child: all hope and possibility in front of us.  We were cherished (if we were lucky) and had somebody to watch out for us and teach us.  Not all possibilities end well.

But here's one of the miraculous things about holding my grand daughter in my arms: my hopes soar.  My love swells and fills my chest and I believe in all good things.  The universe is infinite and wondrous.  Maybe she will be the one who solves world climate change.  Or discovers the cure for disease.  Perhaps she will find her purpose in poetry, or photography, or in helping children or the elderly.

For now, I just know that she is the yin and yang of it all.

Last night
the rain
spoke to me
slowly, saying,
what joy
to come falling
out of the brisk cloud,
to be happy again
in a new way
on the earth!
That’s what it said
as it dropped,
smelling of iron,
and vanished
like a dream of the ocean
into the branches
and the grass below.
Then it was over.
The sky cleared.
I was standing
under a tree.
The tree was a tree
with happy leaves,
and I was myself,
and there were stars in the sky
that were also themselves
at the moment
at which moment
my right hand
was holding my left hand
which was holding the tree
which was filled with stars
and the soft rain –
imagine! imagine!
the long and wondrous journeys
still to be ours. 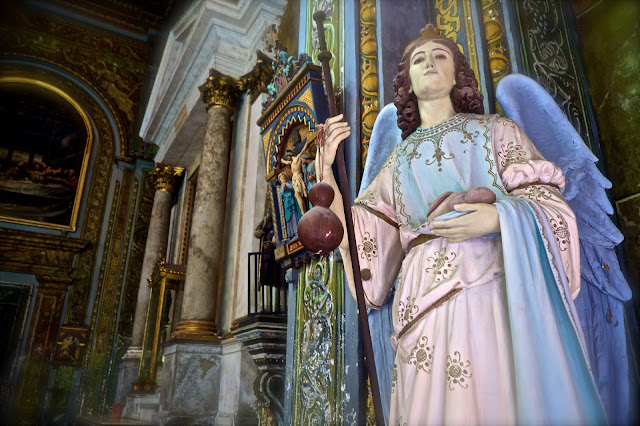 I did manage to get out into the yard both days this weekend to do some much needed clean up.  I took it very slowly as I am still building my body back up after my month long cold.  This cold really knocked the stuffing out of me.  Not only did it make my body feel lousy, it was not good for my mental health.  I've been anxious, cranky, unhappy, down in the mouth, you name it.

On the upside, Lucy had her tumor removed and her teeth cleaned.  She is doing well, running around like nothing ever happened.  That knocked the stuffing out of my bank account, but it needed to be done and now, hopefully, she will be around for  years to come. 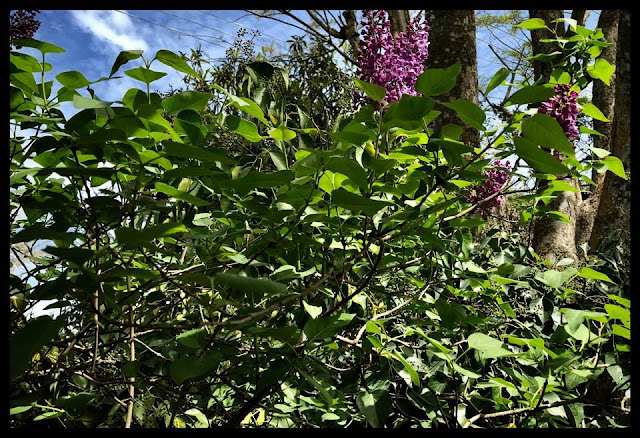 The other upside, the Lilac is starting to bloom!  Daffodils may be had at Trader Joe's for a mere $1.49 a bunch!  And the parents are now in their new home in the retirement community of their choice, enjoying their neighbors and the amenities.  They've already watched the movie Sully in their auditorium,  something they missed when it was in theaters because it's too difficult for mom to get out to a movie theater.

So, yeah, I know there are good things out there.  Just not feeling it as much as I would like.  I will get down to visit with my new grand daughter soon, hoping that will restore me and provide some company for the new mom, who needs her grown up time more now that ever.

I don't have anything profound to say about sadness.  We've all been there and we will be there countless times more in our lifetime.  It helps me just to keep doing.  To get out of my head.  To notice the feelings.  Cry if I must.  Understand that this is the nature of existence.  And then, to turn, and see the purple flowers bursting out of their dark green leaves.
at March 20, 2017 7 comments: 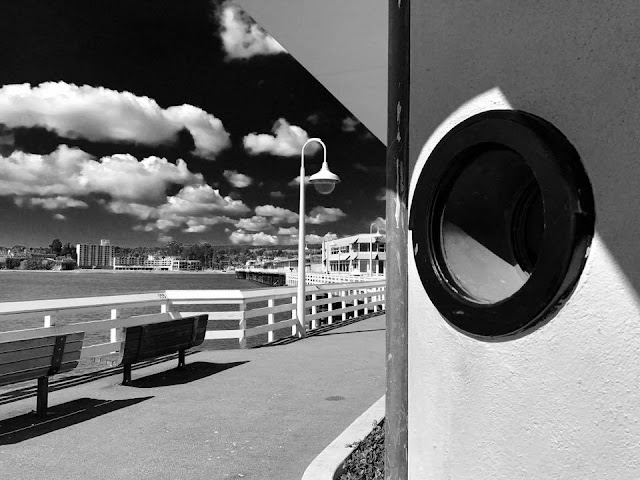 Happy Friday!  We returned home a week early.  It was just not in the cards for us to stay in Santa Cruz with me so sick.  Happy to report I am getting better, sad to say that I'm still fairly ill.  I'm just tired of it all.  Everyone around me is tired of it all.  Whatcha gonna do?

My parents have now moved into their apartment at the University Retirement Community.  We joined them for dinner tonight, a well done buffet with friendly residents introducing themselves.  This is not our grandparents' retirement home.  My dad took great care with the remodeling of their living space, and duplicated the design of cabinetry, windows, fixtures and color schemes.  It looks just like their former home, but in miniature.  It's quite nice.

I'll go over tomorrow to help with unpacking, but will only do as much as I can.  Easy does it.

On International Women's Day, I wrote a tribute to my mother, and read it to her while she was visiting.  She was very touched, and asked me to print a copy for her.  Here's what I said.

My mother has my full appreciation and support, always, but especially today on Women's Day. She was the oldest of 5, editor of HS yearbook and a sports writer for the HS newspaper, attended UC Berkeley, had to quit because she started her family with my dad. Had three children by the age of 25 ( ! ), kept a beautiful house for an exacting husband, went back to the job market, kept the family on track financially, returned to college when kids were in Junior High/High School to get her BA and while dad was in graduate school.

She would never call herself a feminist. Didn't believe in it. But she does believe in all the things that feminists have fought for. So, go figure.

She is often the unsung hero of the family, because she is modest. There are many chest thumpers and horn tooters in our gang, and she isn't one of them.

But I do believe she's the strongest among us.

Today, mom, I want you to know: I see how important your life has been. I've watched your struggles and accomplishments. I'm so glad you are mine.
I'm lucky to have to in my life. I'm grateful.
It was a touching moment when I read it to her.  I managed not try cry, just by a hair.  Her appreciation was palpable.  I tucked the printed copy away in her wheelchair pocket.
Though I often did know it,  especially when I was younger,  she really was a kick ass kind of gal.  I know that now, and I 'm glad she's still around so I can tell her so. 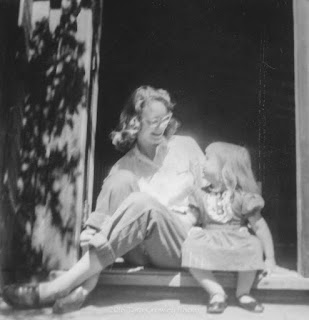 We talked a bit about how difficult it was for a woman making her way in the 1950s era.  Never taken seriously, undervalued, options limited.  She was a smart woman, and learned to hunt game from her father, loved sports enough that she was the sports editor of her high school newspaper, and still looked ladylike in her pearls and loafers.  She quietly went about her business and did what she could.

She had good friends in high school and college, some of whom she still keeps in touch with.

She provided a good example to her three daughters:  learn well, work hard, and try not to get into too much trouble.  We did what we could.  She's been a fantastic wife, keeping my dad well cared for, catering to his (often demanding) needs, helping him stay financially strong, stroking his ego, and being his helpmate over the many decades.  He had a very unstable childhood, and she became his rock.

How did  you celebrate International Women's Day?  Did you think of your heroines?  Who are they?

(My dad snarkishly asked if there was a International Men's Day.  I said, "YES.  Every damn day."  But truth be told, there IS one!  Read about it here.)

Have a good weekend.  Women and Men and Other Identified, alike.  Cuz baby, we all part of the HUMAN RACE.

Well, hallelujah, it's only 71 degrees outside this morning.  We have been enduring hellish heat this summer, breaking records.  The air... 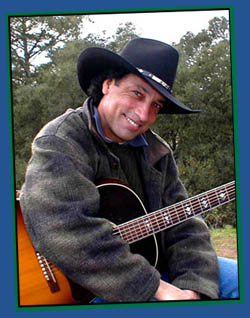