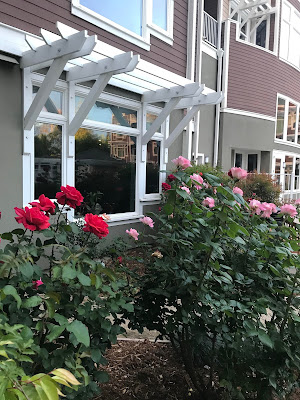 I'm musing.  But not much.  The roses are in full bloom and the garden smells sweet.

Fran came over yesterday to photograph our dogs and get information on them for the Phi Beta Barka group on campus.  There are now 14 dogs living here, and, we discovered, there used to be a St. Bernard!  We wouldn't have sweated Boo's 100 lbs. had we known.  This place makes exceptions to the rule all the time, but they won't tell you that.  So when you get an exception you feel you've won the lottery.  I guess that's the point?

The dog group gets together occasionally and people help one another out with dog walking and even sitting.  If we are away on a long day trip, this will come in most handy.  As we are traveling in May, this came as a great relief to us.

I've also been drafting our bios for the community resource book.  I've read quite a few bios of our residents, and feel I got the gist of it, so decided to take control of the narrative instead of having someone do a write up of us.  It's an interesting exercise to sum up the lives of two people in 350 words or less.  (Good practice for the obits.)  You should try it.  Just for fun.

Of course we're keeping one eye on the news of Drumpf's lawyer, Mr. Cohen.  This could be the beginning of the end, for both the Prez and his children.  I'm speculating that Don Jr.'s wife filed for divorce because she sees which way the wind is blowing.  All three 'kids' that are Ivana's could be in deep doo-doo for their business dealings over the years.  If they are guilty, I would love to see justice served.  But because they are rich, I doubt they'll spend any time in prison.  Dang.  While I take some pleasure in the law catching up to this administration, I am also fearful of the chaos that would ensue if a change of leadership needed to occur.  I mean, it's not like the VP is any great alternative, right?  I skim the headlines, watch the PBS News Hour.  I don't have the stomach for more than that.

The unpacking continues...we did a bit of a push yesterday and it is helping to eliminate some spacial and visual clutter.  We know there is an apartment opening up soon that is the floor plan we desire.  So, what to do with regards to unpacking?  We are leaving most of the books in their boxes, in the apartment and the storeroom, but if we're going to be here 6 mos or longer before moving again, I'd just prefer to get these boxes gone.  We'll be checking with the powers that be and see if we can get a reliable timeline.

That's what's on my mind this morning.  Pretty mundane, if I do say so myself.  If you've hung in there for the whole post, then kudos to you.