We're off to my old stomping grounds for a few days.  We'll see friends, drive along the dusty roads of the valley, take in the sights at Fisherman's Wharf, walk the rough paths of the Carmel Mission.  I love the plaza and garden there.  I used to fantasize about having something similar at my home. If only the money and labor resources could materialize, which they never did.

I find that, having moved away, every piece of geography and every landmark there is imbued with deep emotion for me.  I lived there in high school and for a few of years after that, and those years are already heady with the drama and growing pains of a young woman.  My memory of those years is that I was deeply insecure, afraid of the wider world, and really just wanted to be rescued and kept safe.  Safe from what?  I suppose from having to make decisions and grow up.

I recently had a conversation with a couple of old mates from those days, and their memories of me are of a strong and confident young woman.  "Cool," is what they said.  They admired me from afar.  I sure put on a good show.  I suppose we all do, put on a good show that is.  I think back to my first marriage and remember the absolute terror I felt right after our wedding day.  I remember standing at the screen door off our little kitchen, the moonlight streaming in on a cold November night, choking down my tears because I didn't want to wake my husband.  What a sad sight:  a bereft young woman wailing at the moon while 20 feet away in another room, her husband sleeps.

I was a coward.  I couldn't pull together the courage to say I'd made a terrible mistake and get myself out of that situation.  I felt I had to live with it.  He wasn't a bad person, after all.  He just wasn't for me, and it wasn't my time to be attached to someone in this way.  He was a pot head long before I knew that someone could be that lost in THC.  All my friends smoked, what was the big deal?  My fear and insecurity kept me from speaking out, moving out, and getting on with the business of discovering my own life. 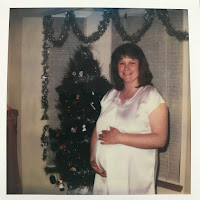 If only I'd really been that cool, confident woman that others saw.  I would not have spent over 10 years in a marriage that was a mistake.  The irony was that it took the birth of our daughter to give me the strength to say "no more."  I was willing to put up with "less than" but I didn't want her growing up watching me live that way.  I was deeply unhappy and sniping at her father all the time.  I was wishing he would just die and go away.  I found out, through Al Anon, that this is a common fantasy when living with an addict or alcoholic.  That they would die and the problem would be over. 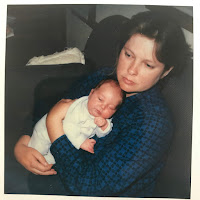 So, I lived this life, put on my happy face for the photographs.  I know there must have been some genuinely happy times.  Must've been.  Had to have been.  But I can't recall them.

I did happily anticipate the birth of our daughter -- very much.  I loved being pregnant and never felt

better in my life.  I experienced many miscarriages and much sadness over the losses.  This pregnancy was working and I was overjoyed.  But I'll tell  you something terrible:  when I looked at the pee stick and saw it was positive, I cried.  Not out of joy, but out of sorrow.  I already knew this marriage wasn't going to last.  That I was going to have to do this parenting thing alone.

Another terrible, lonely moment.  Not so cool. Not so confident.

Email ThisBlogThis!Share to TwitterShare to FacebookShare to Pinterest
Labels: TGOF